My father’s death is bigger
than a planet, bigger than the gravity
wells worlds make, that stars stir up after
implosion. It is bigger than all the stars.
It takes up all space, all dimension, all
that is or ever was.
from “I Imagine My Father’s Death” by
Bryan D. Dietrich.

I have thought about him every day of the forty years he’s been gone. I’ve missed him every day. The most painful thoughts are the ones that make me think of all the things we missed out on. I think about what cancer took from me, from my family.

In 2000, after having met Julian, he and I went on a date and had sushi. When I mentioned the sushi dinner to my mom, she said “Your father loved sushi. Especially sashimi.” She wrinkled her nose and made a face. “I could never eat it and always hated watching him it. It looked slimy and gross.”

It was a gut punch. Twenty years after his death and I was still learning new things about him. I remember going into a quiet room and crying. I would never have sushi with my dad, something I enjoyed eating too. I wondered if he used chopsticks to eat the sashimi. An image of him teaching me how to use chopsticks made its way into my mind. He liked spicy things, so I know he would have enjoyed the wasabi.

What might we have talked about over sushi? Religion? Politics?

Maybe we would never have had sushi because maybe he didn’t approve of my being gay, disapproving like my mom.

In 2017, February 17 to be exact, the morning my mom died. Mom died at home. She was in a hospital bed in the living room. She was in a coma.

Old family friends showed up. As happens while you’re in the presence of dying, we started reminiscing. It was the son of my mom’s best friend and his wife. He was eight or ten years older than I.

Talk turned to my dad. I learned that my dad had taught our family friend how to play chess.

I didn’t know my dad played chess. I said “Are you sure it was my dad and not someone else?”

I had no idea. I knew we had a cheap chess set, a cardboard game board that folded like a checkers board. It had little wooden pieces. Nothing fancy about them. 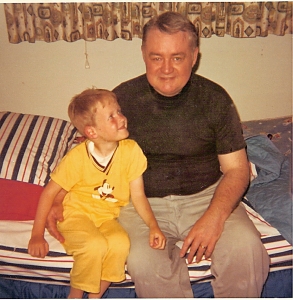 I remember that a year or two before he died my mom bought him a nice chess set. The pieces were in drawers on each side of the board, carved black and white figures. It sat on the center of the coffee table. I wondered then why she bought it for him as I’d never seem him play with the old, cheap set we had.

Sitting there with our family friend hearing about my dad’s chess playing, I remembered about the set she bought him, and I remembered something I’d not given much attention to. In the mid-1990s my mom bought a beautiful chess set to replace the other one that had sat unused all those years. This chess set had an elaborate base, carved wood, drawers for the figures. I’d stopped in to visit mom and there was this chess set on the table, the chess pieces were pewter, Civil War figures, uniforms painted the blue and grey of each side. Grant versus Lee. It was beautiful.

“Why did you buy this? You don’t play chess.” I kind of laughed a bit. My mom often bought things simply for the pleasure of spending money.

She said, “Your father would have enjoyed it,”

I remembered the words, but they didn’t make much of an impression.  Again, I’d never seen him play. I just thought mom wanted something new on the table.

Now I’d just learned he was a good chess player. I thought about the carved set mom had bought him in the years before he died, the one that had sat on the table, collecting dust for all those years. I was twelve or thirteen. I wondered if he’d wanted to get a board to teach me to play?

I was probably being fanciful. It’s just sentimental nonsense I thought brought on by talk of my dad while my mom was in the bed a few feet away taking her last breaths.

But I won’t ever know.

I try not to idolize my dad. I only knew him fourteen years — most of those years I was too young to know much about him other than that he loved me. He worked two jobs. Someone had to earn enough to pay for all my mom’s crazy remodeling and mountain cabin buildings, so he wasn’t around to learn much from as I was getting old enough to understand things about him.

I try not to turn him into this mythical figure, the better parent, the one I wish had been the one who lived until 93 like mom, while she had died at 55. I try not to make him into the parent I wish mom had been. Mom and I had a contentious relationship, always. Maybe dad and I would have had the same. I can’t get caught up in the hope it would have been any different. Getting lost in the unknown, wishing we had filled it with all the things I think I missed serves no purpose, really.

I hold on to the memories of the time we had, the things I didn’t know then.

It’s the only truth I have. Anything else is a house of cards, a straw man.

I miss you daddy. Every day.

This site uses Akismet to reduce spam. Learn how your comment data is processed.